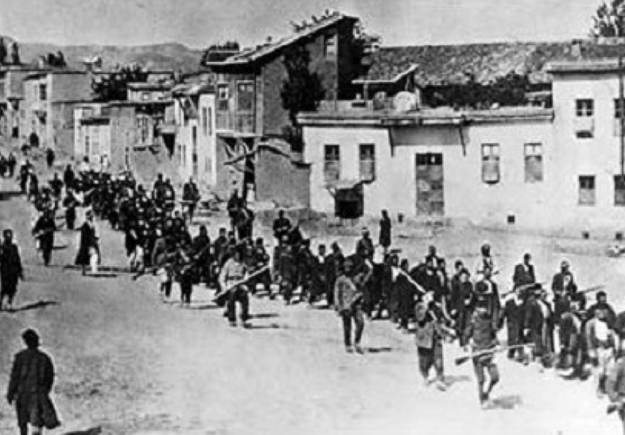 Following the Nazi retreat from the Balkans at the end of the Second World War, Kosovo was reincorporated into Serbia. During the war two political trends had existed in Kosovo amongst the Albanians. One was the nationalist movement some of whose members had supported both the Italian and Nazi occupation forces and the other was orientated to the communist movement and fought with Tito’s partisans.
Both trends, however, generally supported a form of unification with Albania. Serbian rule led by Josip Tito, General Secretary of the Yugoslav Communist Party, was formalised by a vote in favour of ‘annexation to federal Serbia’ by Kosovo’s Regional Council, an unelected body, in Prizren, in July 1945. Only 33 of the 142 members of the Council were Albanians. Kosovo nationalist opposition to Serbian rule and the communists continued, including the armed actions by Shaban Polluzha, an Albanian partisan commander. This resistance resulted in large numbers of killings whose exact numbers are disputed by historians.

After the expulsion of the fascist Nazi regime, Serb, Montenegrin and Macedonian Partisan units entered Kosovo and other Albanian areas. They exercised violence against the Albanian people. The Serb genocide in Kosovo intensified from the autumn of 1944. Under the leadership of Shaban Polluzha the Albanian population countered this violence. Albanians were not allowed to live in a common country and even within Yugoslavia they remained divided between four parts of the country. With violent means, Kosovo was established as an autonomous province within Serbia, which continually exercised violence and terror against the Albanian population. On 8 February 1945, on the pretext of putting down a counter-revolution, Tito declared martial law in Kosovo with Sava Drljević at the head of the administration. Later the terror and genocide intensified in Drenica where Yugoslav Partisan units killed four thousand Albanians during the spring of 1945. On 1 April 1945 in Tivar thousands of mobilised Albanian soldiers were killed and thrown in the sea. As a consequence of martial law and the Serbian, Montenegrin and Macedonian terror and genocide around 45 000 Albanians were killed in Kosovo during this period. In Prizren from 8 to 10 July 1945 the state and party institutions of Yugoslavia and Kosovo (which were in the hands of Serbs and Montenegrins) organised a conference of the National Liberation Council of Kosovo which imposed a resolution on the annexation of Kosovo from Federal Serbia within Yugoslavia. Those who opposed this resolution were killed or sentenced to long terms in prison.

Serbia was formed territorially in 1945 with the union of some areas of the divided Sanjak and the incorporation of Vojvodina and Kosovo and Metohia within it with special status. Serbia took its definitive form from the middle of 1945 when Vojvodina became an autonomous province while Kosovo had a lower level of autonomy. After the situation in Kosovo calmed down and martial law and army rule had been retracted and in the time of ever greater collaboration with Albania, the People’s Assembly of the Province of Kosovo and Metohia approved a Resolution in Prizren (on 9 and 10 July 1945) which declared the wish of the delegates for the annexation of this province by Federal Serbia. Serbia became the only federal unit in which autonomous units were formed, even though the same or similar causes existed for the constitution of autonomy in other federal units too. The 1946 constitution set out the possibility for other units to form but they were never formed.

Regarding Albanian crimes, mainly against villages inhabited by Serbs, in order to get rid of settlers and achieve the return of property confiscated during the period between the two World Wars, foreign authors say that the numbers of Serbs and Montenegrins expelled from Kosovo in this period is between 30 000 and 100 000, while the killings, destruction and thefts, although being reciprocal, had Serbs and Montenegrins as their main victims.

After the capitulation of the Italians in Kosovo in 1943 and the arrival of the German Nazi forces, two essentially different factions crystallised on the political scene in Kosovo: the nationalist faction, supported by the German Nazis, organised into the Second League of Prizren, which announced that it was committed to keeping Kosovo united with Albania; the Communist faction, supported mainly by the Yugoslav Communists, organised into the National Liberation Council for Kosovo and Metohia, declared at the Bujan Conference its desire for Kosovo to unite with Albania.

Following the German retreat from Kosovo, Partisan forces established themselves in the cities of Western Kosovo, while Bulgarian units which were joined by the Yugoslav Partisans, entered eastern Kosovo. The majority of the armed groups created by the Second League of Prizren, including members of the SS Skanderbeg division, left Kosovo alongside the German forces. They had previously participated in rounding up and expelling Communists from Kosovo, including a number of Jews. The Serbian, Montenegrin and Macedonian Partisan units entered Kosovo after the expulsion of the Nazi occupation forces. Noel Malcolm, who analysed the data from a range of authors, concluded that the figure of 45 000 Albanians killed by the Communists is an exaggeration.
The partisans led by Shaban Polluzha, refused orders to fight the German troops in the north of Yugoslavia and decided to stay in Kosovo to defend the Albanian population from the Yugoslav Partisans. Other Albanian partisans were led by Fadil Hoxha, who had previously agreed to be the deputy to Savo Drljević, the Yugoslav military authority commander in Kosovo.

The partisans of Shaban Polluzha, centred mainly in Drenica, were swiftly anihilated by the partisans commanded by Drljević and Hoxha, aided by divisions of partisans from Albania. The Prizren Assembly vote in July 1945 on the resolution for Kosovo’s annexation by federal Serbia was approved by acclaim, only 33 of the 142 members were Albanian (and part of the Communist faction). They had been pointedly reminded that there were 50 000 troops in Kosovo ready to defend the spoils of war.