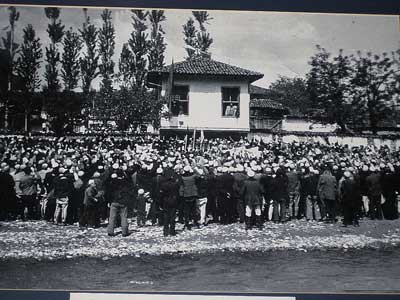 The League of Prizren, which first met in 1878, is generally seen as the beginning of the Albanian independence movement. It went through various stages of development and had varying objectives. It members were predominantly from the Kosovo area and north Albanian highlands. They were overwhelmingly Muslim and at the outset Abdyl Frasheri was only one of two southern Albanians, having a less traditional and more forward-looking approach. The League’s initial activity culminated in accepting a programme of autonomy within the Ottoman empire although it would later aim at full independence. Ottoman support for League was shortlived as the Ottomans soon came to understand its autonomous demands as a threat. During its period of functioning the League appears to have managed to create improved public order in northern Albania and part of Kosovo. In 1881 the League was destroyed by the Ottomans who used armed force to suppress it. Following battles in Ferizaj, Prizren, Gjakova and Peje against weaker League forces the Ottomans once again imposed their own administration.

Even after the League of Prizren was put down, the Albanians’ war for liberation and national unity continued. The League of Peja was formed in 1899 for this reason. The person who had the idea of forming this pan-Albanian league was Haxhi Zeka. Around 500 representatives from many Albanian lands took part in the League of Peja Assembly and it was decided to create branches of the League across Albania. Some textbooks say also that the task of the League of Peja was to fight against the division of Albanian lands by neighbouring countries, but the demand for autonomy was not made by Haxhi Zeka and his supporters, because of an unfavourable political situation and the position of conservative elements.

The Albanian League of Prizren (the so-called League of Prizren 1878-1881) attempted to present the entire territory of Old Serbia, Albania and Macedonia as uncontestable Albanian territory. For this reason, Old Serbia (Kosovo) was to be an area in which the Serbian population was oppressed constantly with no punishment being given to the oppressors, and from which they were expelled by the Albanians.

There was no gathering in Prizren of representatives of all Albanian lands, because the vast majority of the representatives in the Assembly of Prizren were from Kosovo and the highlands, while from southern Albania there were only two representatives, one of whom was Abdyl Frashëri. In relation to the religious persuasions of the participants in the League of Prizren, only five of the delegates gathered in Prizren were Christian. At the end of the first document issued by the League of Prizren it clearly states ‘this document is signed by 47 Muslim representatives, all from the cities of Northern Albania and Bosnia.’ In this document, called the Kararname or Decree, approved on 18 June 1878, nothing is said about schools, about the union of Albanian lands into one vilayet, or about autonomy, and even less about an independent Albanian state.

Initially the Ottoman authorities showed great sympathy for the League of Prizren and offered no hindrance to its formation, because one of its aims was to defend the areas inhabited by Albanians who until then had been under the rule of the Ottoman Empire. The very first article of the Kararname says that the League of Prizren was formed with the aim of opposing every government except that of the Sublime Porte while in article 2 it is stressed that the aim of the League of Prizren is ‘… to protect the imperial rights of the unassailable person of His Majesty the Sultan, our ruler.’ Moreover, the document refers to the sharia in relation to the protection of life, property and the honour of loyal friends of non-Muslim faiths, while the final article says that ‘the League will pass from generation to generation, to the children of our children, and he who breaks with it will be considered a traitor to the Islamic faith and will be cursed and scorned by us.’