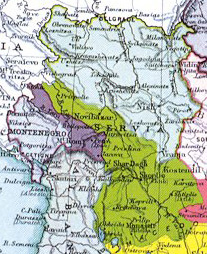 One of the most difficult issues for Albanians living in the Kosovo in the interwar period was the agrarian reform and the resulting colonization of Serbs carried out by the Belgrade government. The process started almost immediately after the end of the First World War.
Although it had various objectives, its underlying aim was to enlarge the Serbian presence in Kosovo. Hence it was the Albanian population which suffered more severely than others as a result of land break up and colonization. It also antagonised local Serb peasant farmers who saw their fellow-national colonists being given larger estates than they had. The demographic objectives of the process and the problems of landless Albanian families resulted in negotiations between Turkey and Serbia regarding the removal of thousands of land-deprived Albanians to Turkey. The Turkish side regarded them as “Muslim Turks”. An agreement was signed in 1938 providing for their removal to Turkey but was never implemented as the Second World War broke out.

In the period between the two World Wars, through so-called ‘agrarian reform’ using the lack of cadastral records, Serbia appropriated about 400 thousand hectares of land belonging to Albanians, and gave it to Slav settlers and Orthodox monasteries. During this time about 15 000 Slavic families with 75 000 inhabitants were settled on Albanian land. As a result of this property expropriation about 250 000 Albanians were moved from their land to Turkey. The summer of 1938 saw the signing of the Yugoslav-Turkish Convention on the movement of Albanians to Turkey – a document which envisaged around 400 000 Albanians moving to Turkey, although because of changes in the political situation in Europe this convention was not implemented.

Regarding the expropriation of land and expulsion of Albanians and settlement with Serbs, these textbooks make reference only to the ‘agrarian reform’ across the Kingdom of the Serbs, Croats and Slovenes and the only specific thing that is said is that as a result of these ‘around 500 000 peasant families benefited.’

-Regarding the agrarian reforms and the expulsions in the period between the two World Wars, the Kingdom of the Serbs, Croats and Slovenes aimed to change the ethnic composition of the population in Kosovo. It used the so-called agrarian reforms to effect this, breaking up old Ottoman property which should have been given to local peasants. A large part of this land, including land belonging to the rebels, was given to settlers from Serbia and to Serbian soldiers and volunteers. However, during the division of these lands local peasants were not excluded, and these local people included Albanians. Although the majority of the land was given to Serb settlers, local Serbs expressed their willingness to join the Albanians, presenting a united front against the incomers.

Noel Malcolm, who quotes Serb, Albanian and international authors, says that 200,000 hectares were expropriated and half of this was given to the settlers – while in Kosovo more than 13,000 families, with around 70,000 members, were settled in Kosovo. Noel Malcolm says that the number of Albanians and other Muslims from Kosovo who were expelled between the two World Wars is believed to have been between 90,000 and 150,000.

The agreement reached in July 1938 between Yugoslavia and Turkey provided for the expulsion of about 40,000 families to Turkey between 1939 and1944. The outbreak of the Second World War prevented this agreement from being implemented. Officially its speaks of the ‘repatriation’ of the ‘Muslim Turk’ population, but it was clear from the zones which are specified within it that the majority of those to be moved would be Albanian. International authors cite the figure as 200,000 and 400,000 and add that the majority of them would have been Albanian. However, the agreement between Yugoslavia and Turkey was not only opposed by the victims and their countrymen, but prompted 65 students from Kosovo – of whom 56 were Serb and Montenegrin, 1 Turkish and 8 Albanians – to post illegal posters denouncing this plan throughout Kosovo, as well as at embassies in Belgrade.