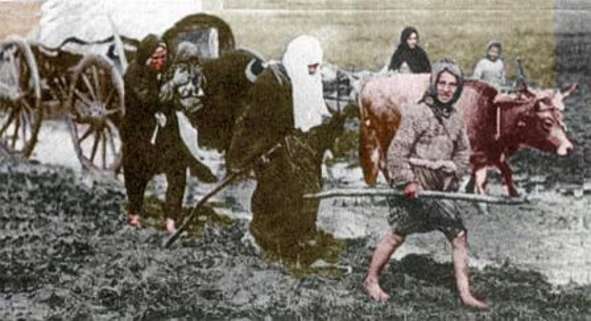 The forced expulsions of Albanians and other Muslims from the Nis Sanjak followed the territorial changes resulting from the 1878 Treaties of Treaties of San Stefano and Berlin. These expulsions were carried out with extreme brutality and deprivation, and resulted in large numbers of fatalities. About 50,000 people were expelled. These acts were the policies of the central powers in Belgrade and were generally not initiated by local Serbs. This in turn up until1912 resulted in Serbs being forced out the areas the Albanians moved in to, often as a result of revenge attacks. The number of Serbs removed was probably about 60,000. The expulsions left a particular mark on the collective memory of all the victims.

The Serbian army committed genocide and terror against the Albanian population in 1877-8, using violence to force the relocation of arround 160,000 Albanian inhabitants from 640 settlements in the Niš Sanjak region and elsewhere. These Albanians were forced to find shelter deep in the Kosovo Vilayet and these people are still today known as ‘muhaxhirë’ (refugees). This mass violent deportation meant the ethnic cleansing of these Albanian settlements and their colonisation with Serbian populations.

From liberated southern Serbia. Albanians arrived who had been expelled from Toplica and Jablanica. As a result of having lost what they had owned in Serbia, the Albanians took revenge against the Serbs of Kosovo. This prompted a large number of Serbs from the border areas crossing into the Kingdom of Serbia, leaving their own lands to the Albanians.

Although numbers are lacking, a contemporary study concluded that in all this region there were 110,000 Albanians while an approximate assessment of the number of refugees established in Kosovo’s territory in 1877-8 would be around 50 000. As well as the Albanians a small number of Muslim Slavs were established in the territory of today’s Kosovo. A Serb army commander refused to expel the Albanians from the town of Vranjë, with the explanation that they were well-behaved and peaceful. This expulsion of Muslim Albanians from these lands and their relocation in the territory of today’s Kosovo had the effect of souring relations between Muslims and Christians in Kosovo – the refugees took a very aggressive stance against local Christians, especially against Orthodox Serbs. Similarly, because of this situation there was an ongoing flux of Serbs from Kosovo (of course there were other reasons for moving, such as general stagnation, weak administration, better life in Serbia etc.). On the question of the number of Serbs expelled from Serbia between 1878-1912, 60,000 seems a reasonable assumption.