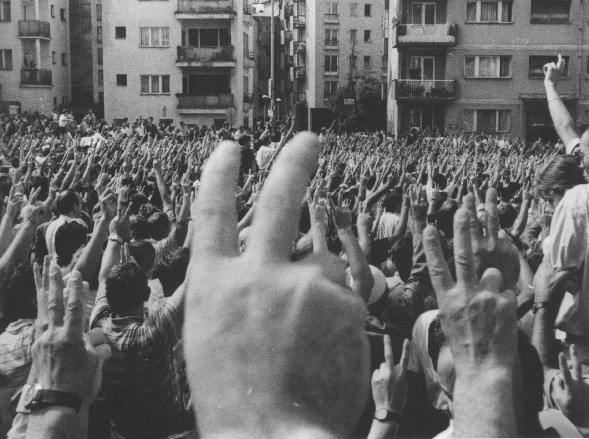 In 1988 new demonstrations were led by Trepca miners protesting Milosevic’s removal of local Party leaders. The miners marched on Pristina their numbers enormously augmented by other workers and students. The miners renewed their protests at the beginning of 1989 by blocking themselves in to the mine to protest preparations being made in Belgrade to curb Kosovo’s autonomous powers. Other wider protests were held. A state of emergency was declared. In March the Kosovo Assembly surrounded by the army and police met to accept the amendments to the Constitution. Further protests were held. A few months later the Democratic League of Kosovo led by Ibrahim Rugova was founded. Over the next two years most of the Albanian deputies met outside the institutions. They passed an amended Constitution declaring Kosovo a republic within the Yugoslav Federation and a referendum was held on independence. Belgrade responded by removing Albanians from their jobs in they state sector, they were banned from the university and factories were closed. The LDK based its policy on passive resistance and lobbied the international community to support their approach. It was becoming coming clear, however, especially after the Dayton Agreement, that patience with ineffective passive resistance was running out.

The political leadership in Kosovo which was, from 1981 to 1989, an instrument in the hands of Serbian policy, understood rather late the game being played about the suppression of autonomy. In 1989 demonstrations broke out across the population for the protection and promotion of autonomy. The Trepça miners locked themselves in the mine for two weeks in protest and demanded the defence of the independence of Kosovo’s institutions and for Kosovo’s fate to go to the UN. On 23 March 1989, the Kosovo Assembly, surrounded by tanks, gave its approval for a change to the constitution. During the demonstrations against the change to the constitution, 30 people fell as martyrs. 254 intellectuals and members of the Albanian leadership were isolated. One particularly severe form of Serb police repression was the poisoning of 7000 Albanian pupils.

On 23 December 1989 the Albanian intelligentsia founded the Democratic League of Kosovo (in Albanian, ‘Lidhjen Demokratike e Kosovës’ or ‘LDK’), which, under the leadership of Ibrahim Rugova, focused on solving the issue of Kosovo and the Albanians in Yugoslavia on the basis of the principle of self-determination. Later other parties were founded and the Co-ordinating Council of Albanian Political Parties in the former Yugoslavia, which supported Kosovo as an independent and sovereign state, supported the demand of Albanians in Macedonia to be a state-forming faction, while for the Albanians of the Presheva Valley it called for a high level of autonomy with the right of union with Kosovo. With the aim of unifying the Albanian people a campaign of blood feud reconciliation was begun and more than 1200 blood feuds were resolved. On 2 July 1990 the Assembly of Kosovo made a Constitutional Declaration on Kosovo’s independence and equality in Yugoslavia. On 7 September 1990 the Constitution of Kosovo was approved. In September 1991 a referendum was held on Kosovo as an independent and sovereign state. On 24 May 1992 parliamentary and presidential elections were held. The Serbian authorities expelled Albanian pupils and students from schools and university departments, but the Albanians organised an independent education system through schools held in private houses. Likewise, the Serbian authorities sacked thousands of Albanians, many of whom were forced to emigrate. The Albanians, led by Ibrahim Rugova, convinced the world that they wanted freedom. The world was convinced that Kosovo deserved freedom.

At the end of 1988 hundreds of thousands of Albanians protested in Kosovo against the withdrawal of Kosovo’s autonomy from Slobodan Milošević’s Serbia. The protesters opposed the change in Kosovo’s Communist leadership.

Likewise, the strike by the Kosovo miners, who in 1989 blocked themselves into the mine for ten days with their main demand being against the removal of Kosovo’s autonomy, and for ‘brotherhood and unity and the right path of Tito’. After these strikes and protests an extraordinary situation was announced and hundreds of intellectuals, professors and leaders of social enterprises were arrested. In 1988 Azem Vllasi, the leader of the the League of Communists in Kosovo, had been arrested and put on trial. He had opposed Serbian policy. He was released from prison after almost a year.

Despite these protests and strikes by the Albanians of Kosovo, Serbia completed the process of suppressing Kosovo’s autonomy when, on 23 March 1989, the Kosovo Assembly, with an Albanian majority, approved this. The Kosovo Assembly building was surrounded by Serb the police, army, tanks and armoured vehicles. Kosovo and Serbia textbooks not only fail to mention that the assembly had an Albanian majority but also don’t say that ten Albanian deputies of the Kosovo Assembly voted against the withdrawal of autonomy of 1974. Some months after the suppression of Kosovo’s autonomy, the Democratic League of Kosovo (LDK) was formed and which under the leadership of Ibrahim Rugova, soon became undoubtedly the largest political party leading Kosovo.

In March and April 1990, thousands of Kosovan pupils were sent to hospital straight from school because of stomach aches, headaches and vomiting from, as was said at the time, mass poisoning of Albanian children. Later on the basis of analyses of blood and urine a United Nations toxicology expert came to the conclusion that sarin and tabun had been present. In 1995 it was made public that the Yugoslav Army had produced sarin. In some parts of Kosovo dozens of attacks occurred against local Serbs by Albanians who believed that their children had been poisoned by the Serb authorities in Kosovo.

On 2 July 1990, in front of the Kosovo Assembly building in Prishtina, most of the Albanian deputies of the Kosovo Assembly, supported by the LDK, declared Kosovo as a republic ‘within the framework of the Yugoslav federation’. Following the declaration Serbia suppressed all of Kosovo’s legislative, executive and judicial institutions. The vast majority of Albanians in employment were thrown out of their jobs and the Albanian-language media, hospitals and factories were closed down. Albanian students and teachers were forbidden from using the UP premises.

Two months later, on 7 September 1990, many of the Albanian members of the Kosovo Assembly met in secret in Kacanik and declared the Constitution of the Republic of Kosovo within Yugoslavia. A year later in September 1991 a referendum was organised for the recognition of Kosovo as a sovereign and independent state with the right to join with Yugoslavia. The organisers claimed that 99% of those who turned out to vote voted in favour. On 19 October 1991 the by-then unofficial Assembly of the Republic of Kosovo changed the constitution and removed all connection with the state of Yugoslavia but this is not mentioned in the textbooks of Serbia and Montenegro, nor those of Kosovo or Albania. In this period, under the leadership of the LDK a parallel system was created in the areas of education, health, finance, media, culture and sport. Presidential and parliamentary elections were organised and in the diplomatic sphere there was lobbying for the internationalisation of the Kosovo issue.

Until the middle of the 1990s there was no opposition to the passive and peaceful resistance, led by the LDK under Ibrahim Rugova. At this time, however, Adem Demaçi, who had suffered 28 years in Yugoslav prisons because of his work for the unification of Albanian lands in Yugoslavia with Albania, joined the Parliamentary Party of Kosovo which had been formed in Kosovo in 1990. This party aimed to carry out active peaceful resistance. According to Demaçi, a class of people was being formed who were unhappy with the policy of passive and peaceful resistance and were demanding an armed solution. Demaçi did not achieve his aim of active peaceful resistance. In September 1996, through the mediation of the Italian Sant’Egidio Community, Ibrahim Rugova signed an agreement with Slobodan Milošević for the return of Albanian pupils and students to school and university buildings which had been taken over by Serbian state institutions.